In Indiana, 1 in 7 men experience sexual violence throughout their lifetime.

On October 29th, Reverend David Marcotte of Hamilton county Indiana has been booked on a plethora of felony charges against a minor, including child solicitacion. Since said booking, Marcotte was released on his own recognizance, and information awaiting his trial is yet to be released.

Marcotte was previously employed by St. Malachy Church and School in Brownsburg prior to the release of said allegations. 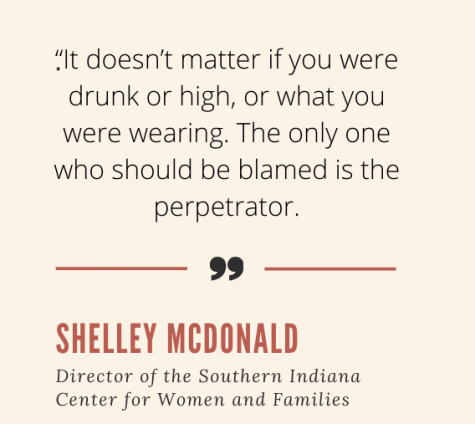 Such crimes appalling the state, and raise many questions regarding the safety of minors in their day to day life both in and out of schools.

With approximately 93% of juvenile victims knowing their abuser, this is a plight familiar to many highschoolers.

An anonymous senior is no stranger to such dilemma. When she was thirteen, a man close to her sexually assaulted her, and she says she was left with many confusing questions, the most pressing of which, if she should report.

Despite her apprehension and fear, the senior found the strength to report. Although, the process was intimidating, the thought of her attacker facing no punishment didn’t sit right with her.

“ I didn’t want to report originally because I was so scared.” she said. But I couldn’t stand the thought of him doing this to someone else like it was nothing. So, that is why I reported. More for others than for myself.” said the senior.

She never had her day in court, due to a lack of physical evidence, but she does not regret reporting her attacker, and encourages others to do the same.

“I may not have gotten my day in court, but I can sleep well at night knowing I did everything I could to keep this from happening to someone else,” said the senior.

Many negative emotions can prevent a victim from reporting, and the senior was well acquainted with the emotional struggles that arise when she was deciding to report.

The senior relied heavily on others to keep her going after her attack, and she also received mental health counseling to keep herself level-headed regarding her attack.

Shelly McDonald, the Director of the Southern Indiana Center for Women and Families location, recognizes the struggles many young people face was deciding to come forward about a sexual assault, and she wants students to know of the resources available once an attack occurs.

You can call the CFW and give as much or as little information as they want if they need someone to listen to you after an attack, McDonald said. Simply having someone there to remind you it’s (the attack) is not your fault is so meaningful.”

McDonald wants students to know that their attack is not their fault, regardless of the circumstances the attack took place.

“It doesn’t matter if you were drunk or high, or what you were wearing. The only one who should be blamed is the perpetrator.” said McDonald

Although reporting is daunting, the brave survivors who reported against David Marcotte are not only seeking justice for themselves, but also protecting others with such alleged atrocities.