Lives Outside of Teaching: Matthew Jacobi

For any student that has taken French, attended Teachers Got Talent, joined the Friends or Betty White appreciation club then you’ve probably been introduced to Matthew Jacobi. Jacobi has been teaching French for 12 years now and has participated in plenty events at New Albany Highschool.

The students at NAHS never hesitate to show their appreciation to Jacobi considering he has won “Teacher of the Month” about 24 times since they’ve allowed students to nominate teachers. 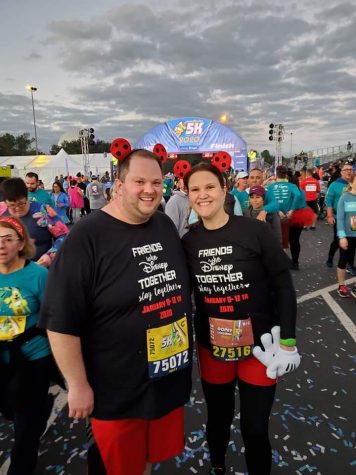 Q: Have you always wanted to teach?

A: “Yes! I had thought about teaching since Elementary school actually. I thought I would teach elementary for a long time but then once I got through HIgh school I had some teachers that were really influential so, I decided I wanted to teach high schoolers.”

Q: What are some of your favorite things to do outside of teaching?

A: “I love live music! I play the piano, go to concerts, read, hang out with friends and travel.”

Q: How long have you had an interest in music?

“My first or second year teaching I decided to do something for myself and started taking guitar lessons because it was always something I thought would be cool to do.”

A: “Disney World obviously! Aside from that, I do love Paris and it will always have a special place in my heart because that’s where I studied abroad.”

“I’m more of a big city person. I love traveling to big cities! Probably one of my favorite vacations ever while growing up was when we went to the beach in Oregon, it was probably one of the coolest beaches I’d ever seen.”

Q: What’s been the best concert you’ve gone to and why?

A: “For a really long time, it was Elton John but when Elton John in his 2011 tour when he came through Louisville the first time. I also went to Celine Dione this past year and she was phenomenal! It might have of displaced Elton Johns concert.”

“My favorite musician ever is Bendon James so anytime I get to see him in concert is a pleasure.”

Q: What concert would be your dream concert?

A: “I’ve always said that I have a bucket list of people that I’d like to see in concert and I’ve checked a lot of them off! People like; Paul McCartney, Elton John, and Celine Dione. My one still remaining that I would really like to see one time is Dolly Parton.”

“If magic could happen, a group that I think would be really cool to have seen— it’s not possible now— but the Beatles would have been really cool to see in concert.”

Q: Do you have any other hobbies outside of teaching?

A: “One of my absolute favorite things to do is on a cool day to sit on the front porch in a chair and read a book. It has to be 50 degrees because I love to be curled up in a blanket.”

Q: If you weren’t teaching what would you probably be doing right now?

A: “I’ve always said that my dream job would be party planning! If I had lots of money I have this vision for a business to have some property somewhere and build this really cool event venue. This building would be a place where you could have weddings either indoor or outdoor but it’d be all-inclusive because I would plan the event!”