Not just a teacher 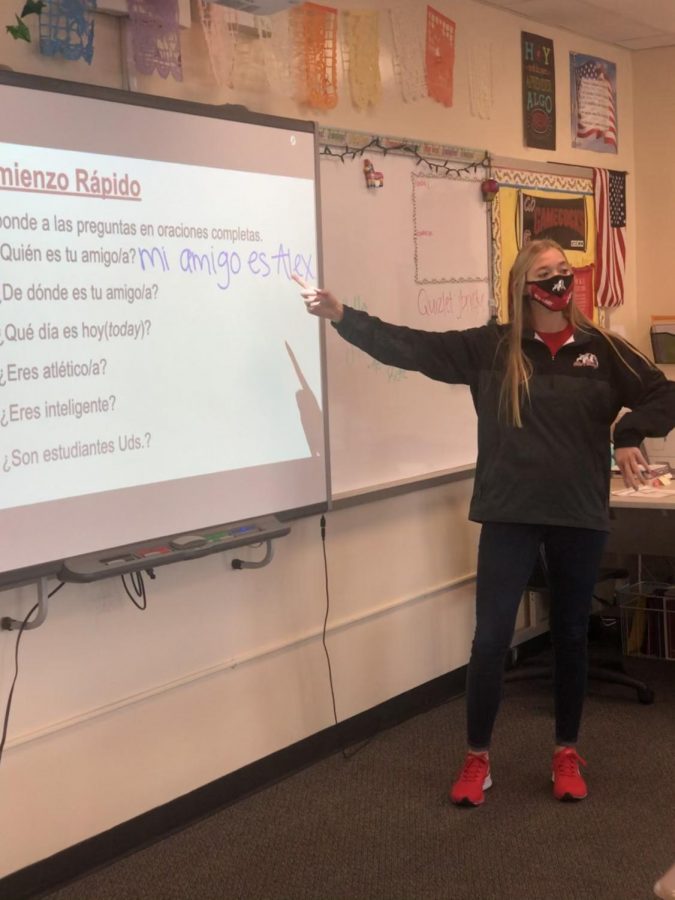 She never thought this is where she would be. 28-year-old Jensen Ricke teaches her Spanish students every day, hoping everything will go as planned, even though, this isn’t what she planned.

“So, I’ve always liked helping kids and being able to help people and then when I went to college, I took a Spanish class,” Ricke said. “I really liked it and my professor said, ‘Hey you should major in Spanish’ and I was like ‘I can teach with that,’ and so it wasn’t necessarily something that I always wanted to do but I wanted to do something in the field of helping people and so Spanish kind of led me into teaching.”

Teaching isn’t something that Ricke would have dreamed of doing for her career. She said she always wanted to be a nurse because she loves helping people. Even though that plan fell through, she still wouldn’t think she could be teaching high school.

“I wouldn’t have chosen [high school] if I thought about [teaching] when I was in school,” she said, “I definitely would have said elementary. I never would have thought high school.”

Becoming a teacher takes a lot of work and effort. Ricke says she wasn’t prepared to start her first-class teaching on her own. For her, the first-time teaching in high school “is like being in high school again.” Since she has always been a Bulldog fan she says, it made it a little easier to start fresh.

“It was definitely hard [being the first time in class alone],” Ricke said. “College can’t prepare you for a classroom full of 30 teenagers, seven times a day.”

“Working with teenagers makes it more fun because you can relate to them a lot more,” she says, “but sometimes the attitudes that you get with them or the defiance to not wanting to do any of the work. When we do practice, just having participation it makes it a lot less successful.”

“With all that stress comes reward” and Ricke enjoys the good times with teaching. Even though she is challenged every day, she gets to look at the students that become her favorites and see how she has shaped those students.

“The type of students who struggle at first, but they work really hard [are my favorites],” Ricke said. “Eventually, if they continue doing the work, then they have that a-ha moment and they get it.”

Ricke does more with NAHS than teaching. In her sixth year of teaching, she became the business manager for the athletic department. Ricke says it gives her change and “more opportunity to go to more athletic events” as well as “shows the kids support.”

In recent months, Ricke says dealing with COVID-19 makes teaching “that much harder.” She has to find ways to work around students not always being in class, and not being able to help them with all their learning needs.

“Originally before school started,” Ricke says, “I was nervous students weren’t going to learn anything. It’s really hard to try and get participation while students are ALL virtual and there is the chance that you will never meet some students and that just makes it hard to go by.”

With the challenges of COVID-19 comes the challenges that would happen in her normal class. Ricke says she has many ‘pet peeves’ that get in the way of everyday life—and she says it makes it “a whole lot harder.”

“Cellphones and technology,” she said. “They are definitely the worst things about teaching. And this year it’s impossible to crack down on them so you don’t know if a kid is doing their work or nothing school related at all.”

Overall, Ricke says her goal in teaching is to make an impact on the student’s lives. She says she wants to teach the students Spanish, and learn to appreciate the language, but she also says she wants them to know that they were cared for, and that someone hoped for the best.

”I want them to feel that they were loved and cared about and that they had someone that supported them and cared for them if they ever needed help,” Ricke said. “When they look back in 50years they may not be able to speak Spanish correctly, but when they look back, they say, ‘oh yeah, that teacher cared for me.’”

Teaching at New Albany High School has brought Ricke many close friends she says. April Goforth teaches Spanish alongside of Ricke, and she has become very close with Ricke. Their friendship has not only improved their bond, but also their teaching Goforth says.

“She is extremely creative and comes up with a variety of fun activities that I like to use in class,” Goforth said. “She has been a tremendous help to me throughout my time here at New Albany. She and I have collaborated to create a variety of materials. She is an excellent teacher and dear friend!”

There is way more to teaching than getting the material to the students. Teachers are superheroes for the students, and Ricke demonstrates the work it takes to be a teacher, and to be the person who shapes the minds of students.

“It’s a lot of work! You’re not just a teacher,” she said, “you’re a counselor, a nurse, you’re a mom, you’re a friend, you’re a therapist, you’re a janitor…you are way more than a teacher.”